A list of standard and uncommon ways to tune your ukulele

Stringed instruments are unique in the instrument world. If you think about flutes, clarinets, saxophones, and any horn instruments, they have a fixed tuning. You physically can’t change it.

(They also have a fixed way of playing them. There is no left or right handed, just the one way. That’s always stuck out to me, but that’s neither here nor there. I did have the thought of making a left handed piano when I was younger. You know someone would buy that for the novelty! Dibs on the idea).

Even stringed instruments like violins, violas, double basses, and cellos can be tuned differently. But they’re not. Outside of tradition and reading sheet music I'm not really sure why. I’m assuming it has something to do with those instruments not playing full chords so there’s no value in it. But that’s just my running theory.

Heck, mandolins don’t even really change tuning. You can, just like you can change the tuning on the previously mentioned instruments, but it just doesn’t happen.

So why do instruments like ukuleles use so many different tunings?

Well, it gives you different options. These options create tonal diversity. This diversity opens the doors to new ideas, harmonies, voicings, and fun.

These alternate tunings have somewhat to do with the size of the ukuleles, whether you’re playing by yourself or accompanying other instruments, and personal preference. I’ll make sure to call these out when we get there.

When I list tunings, I'm going to go from the fourth string to the first. These tunings will be for Soprano, Concert, and Tenor ukuleles. Baritone ukes have a different standard tuning, so we’ll tackle that separately. 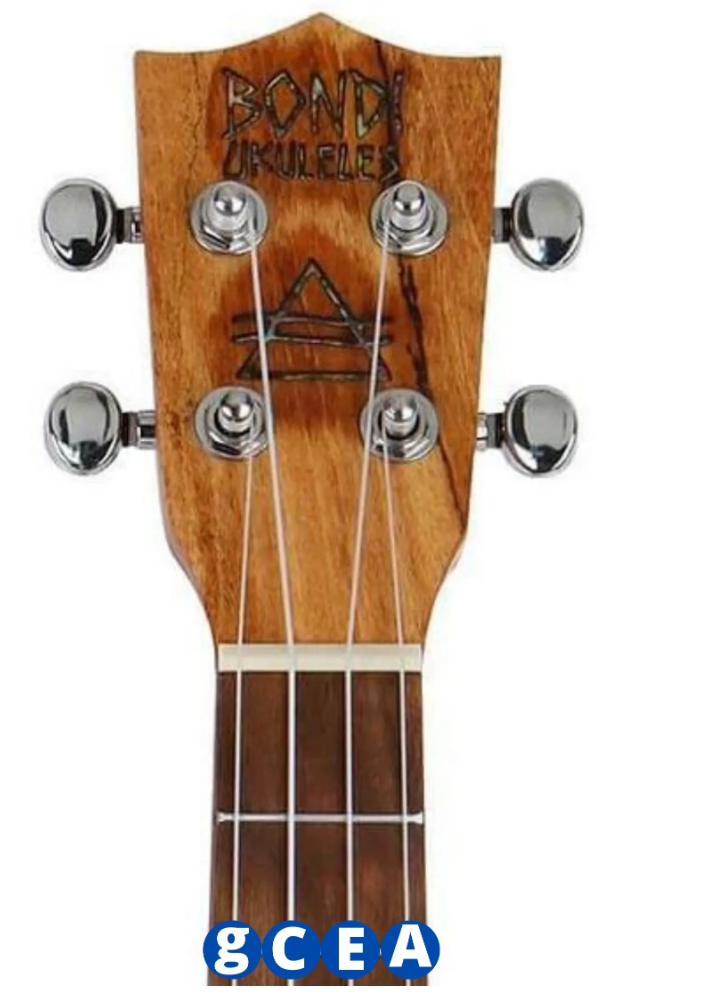 Every instrument has a standard tuning. For the ukulele that’s gCEA. The ‘g’ is lowercase to indicate that it’s at a higher pitch. Ukuleles are unique in that the higher strings are on the outside, with the lower strings in the middle. This is called a re-entrant tuning.

Since the ukulele was descended from the Portuguese guitar specifically (a whole article in itself), it made sense to carry this idea over to the ukulele. As for the reason for the specific tuning (gCEA), that’s a little more ambiguous. More than likely it was a combination of the strings and ease of chord voicings.

Original ukulele strings were made of gut (sheep or cow), so you could only make a string so thin or thick. The combination of the tension (pitch) and specific chord voicing needs (pitch intervals between strings- to make chords that are easy to play and pleasant to the ears) is probably why we settled on this.

This tuning is optimized for the key of C (Major). This is helpful because C Major is a very common key across many instruments. If you look up chord charts on the ukulele, they’re going to be in this tuning more often than not.

If you do, you’re ready to move onto the next tunings. 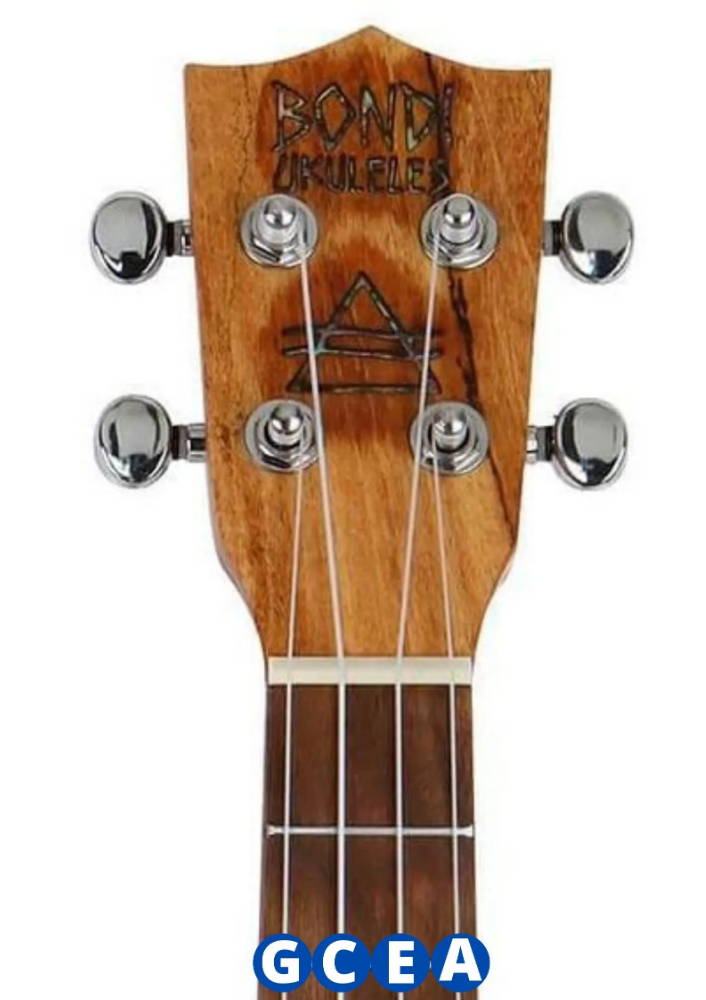 OK, so you can technically use this one while you’re still getting the standard tuning down. The only difference is you’re replacing the high g with a low G. You play the chords the exact same way. The low string is just an octave down.

It has a different sound to be sure, especially if you’re used to the high g. Just make sure you buy a set of strings for the low G tuning. If you use strings meant for standard tuning and tune the high g down, it will be super floppy. And that’s no good. 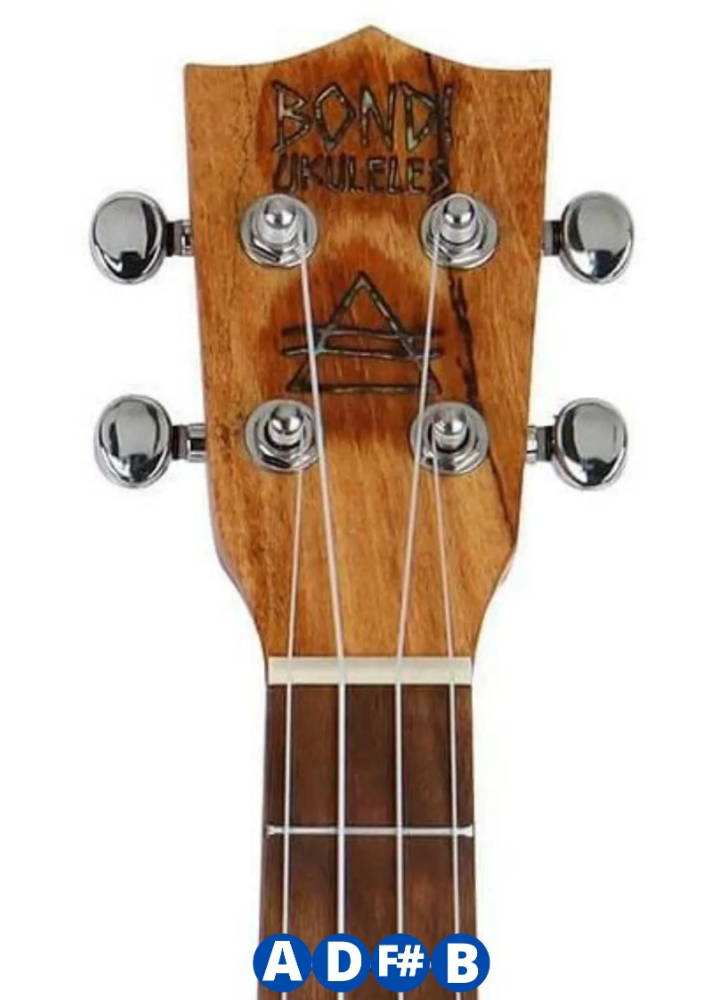 If you have a Concert ukulele lying around you can experiment with this tuning on it. Some people say it doesn’t work because of the size. But don’t listen to “some people". Trust your ears and decide for yourself. 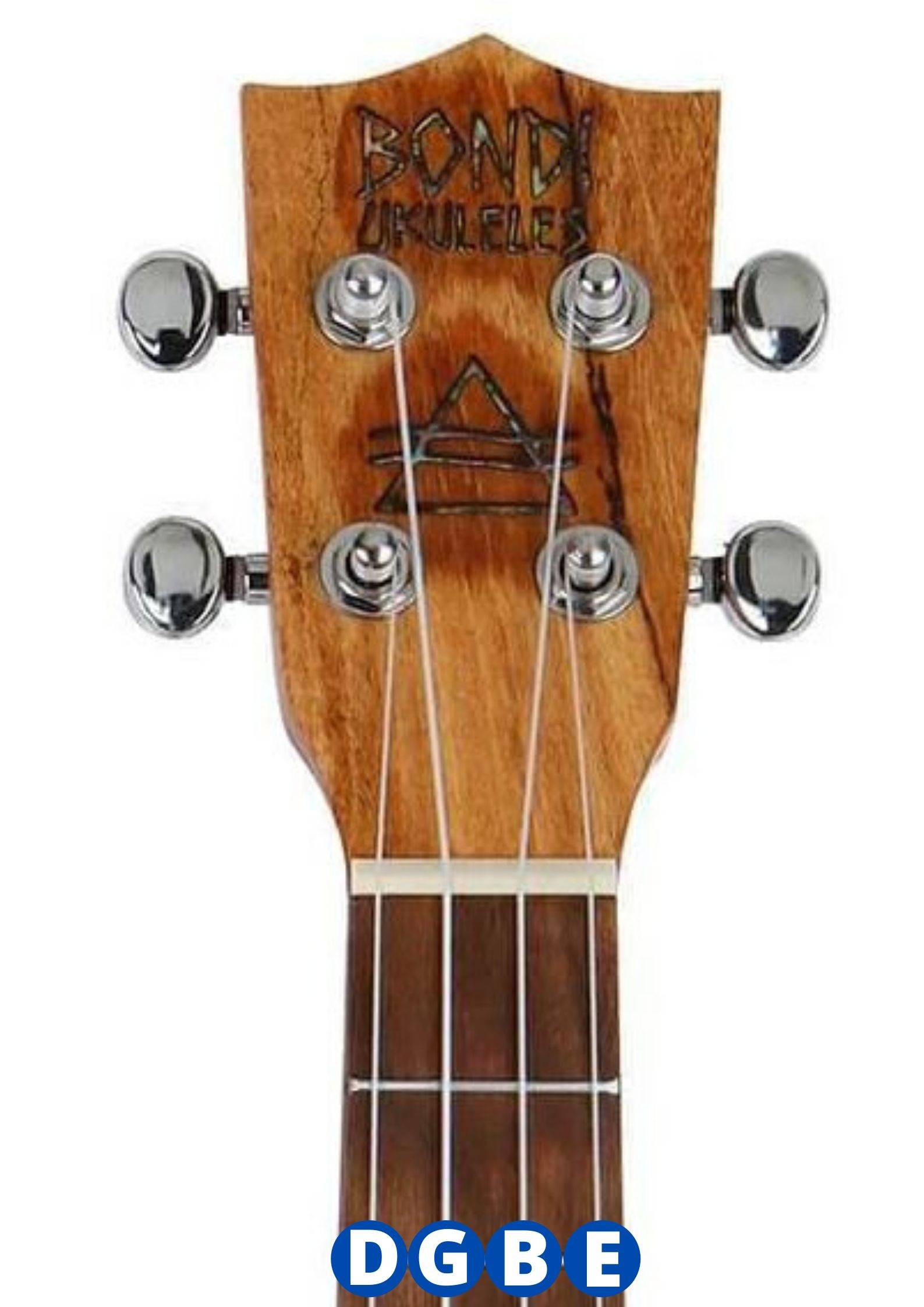 Baritone instruments in general are tuned differently than their non-baritone counterparts. Because of the increased scale length (the distance between the nut and the bridge saddle), they can’t support the tension from a higher tuning. So to keep normal string tension on a longer scaled instrument, you naturally tune down.

This tuning has the same intervals between strings as the standard gCEA (or GCEA) tuning. A fourth between D and G, a third between G and B, and a fourth between B and E. The whole tuning is just two and a half steps down.

So if you strummed a C Major chord shape on a baritone ukulele, you’d actually be playing a G Major chord in pitch. If you’re playing with other musicians you’d need to transpose the music. Your chord shapes won’t match the actual chords being played.

Conversely though, because you’re using different chord voicings and chord shapes, you add a nice aural texture to the music. Any ukulele duo or trio will benefit from having a Baritone uke. If you don’t have one you should definitely get one!

Baritone tuning can also be used on Tenor Ukuleles. Tenor ukes have just a long enough scale length to pull this off. It will naturally sound different on a Tenor ukulele as opposed to a Baritone ukulele. More than just the size difference of the bodies, it also has to do with the string tension.

The lower you go in pitch, the bigger gauge of strings you’ll need. Your standard Tenor uke strings won’t handle the lower tension as well, so pick up a set of Baritone strings for this.

Open tunings are tunings that make a chord from an open strum. So if you strummed all of the open strings, you’d have a chord (typically Major). These are big in Bluegrass and Folk music. While they’re not very common in ukulele music, they are possible and they do sound good.

There aren’t many resources for open tunings on ukuleles for whatever reason. But with a little music theory (don’t panic just yet) and a couple guidelines, you can experiment with these.

OK, easy music theory time. All major and minor chords are made up of three notes. The root, third, and fifth. We’ll only talk about Major chords today. Let’s take the key of C Major since it doesn’t have sharps or flats. Here is the C Major scale.

And let’s keep it simple and say we want to make a C Major chord. C is the root because we’re building a C chord.

To find the third, count up three notes in the scale (including your starting note of C). That’s E.

Count another three up from that (including the starting note of E) and you’ll get G.

The C Major chord is made up of C-E-G.

Keep that in mind as we talk about the tuning tips.

If you wanted an open C tuning, you would tune your uke to CEGC. Root, third, fifth, and root (or an octave of the root, meaning the same note either lower or higher).

Even though we used the example of C Major, getting our standard ukulele tuning to make that tuning would be a challenge. You would need to tune your strings either really high or really low. This makes the tension all wonky, and me a little nervous.

Since we’re already using our standard GCEA tuning, tuning to open G is a much better idea. Let’s take a look at the G Major scale to find our root, third, and fifth:

Did you find the root, third, and fifth notes in the scale?

If you said G, B, and D you’re spot on. So in theory, our tuning would change to GBDG. I’m using Low G, but high g works the same, it would just be gBDG. Here’s what you do: 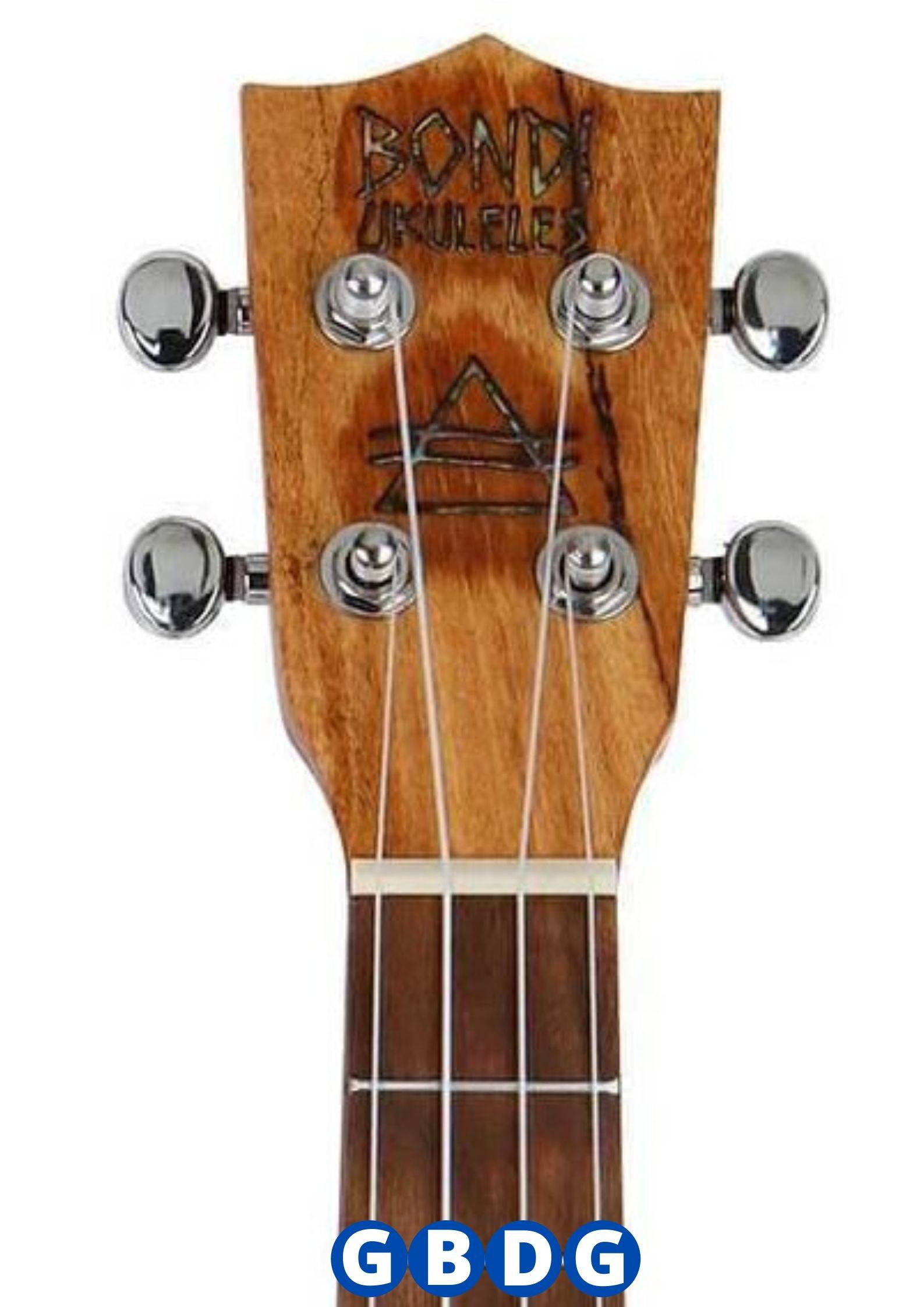 Let some open strings ring, that’s where these open tunings really shine. This will take some experimenting, but that’s a good thing. Play around with keeping the outer strings open and playing the second and third strings on the same fret. You’ll get some really cool new chords.

This also opens the door for using a slide. This is the main reason you see open tuning so often in Bluegrass. If you don’t have a slide, they’re fun and you can get one for pretty cheap.

Along the same lines, the ease of chording in open tunings open the door for simultaneous lead and rhythm playing. Check this out as a simple example:

Fun tip: If you want to jazz up this open tuning, tune the first string from G to F#. That will give you a Gmaj7 open tuning. It’s way less useful, but sounds really cool. Open to the fifth fret is especially nice.

Knowing a little music theory, or at least chord notes, will give you better direction on building chords in open tunings. But even just experimenting will be an eye opening experience.

Whilst there are many standard (or well accepted) tunings we discussed, you can really do anything you want to. Once you dive into the world of obscure tunings, the rules go out the window. I’m not saying it will sound good, and you’ll definitely need to change your chord shapes. But experimenting will at least open up some creative juices.

(it will make playing other people’s songs more difficult, but all the more reason to use these to write your own songs!)

Just keep in mind the scale length of your uke, and the gauge of your strings. Some general tips for success:

If you put Baritone strings on a Soprano uke and tuned it up to high G tuning (gCEA), you’re risking damage to your uke. If you put Soprano strings on your Baritone uke (in this imaginary world where they’re actually long enough), and used Baritone tuning, they’d be floppy and wouldn’t be playable.

Outside of these guidelines, go crazy! You may end up going back to standard tuning (you’ll use it most of the time anyway), but using alternate tunings is a fun way to mix things up. You can end a creative rut, spark new ideas, and get further engaged in your playing by simply changing your tuning.

What’s your preferred tuning? Let us know in the comments!