What Is My Thumb Piano Called? 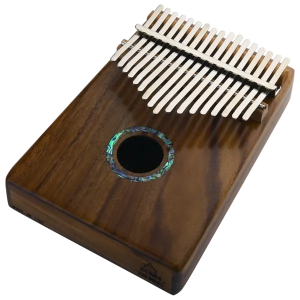 Once you venture outside of “traditional” instruments we’re used to seeing, like guitars, pianos, violins- instruments become a bit more regional.

A guitar is a guitar no matter where you are in the world. Sure, different regions will have variations of this, but those are small subsets of guitars. A piano is a piano and a trumpet is a trumpet.

But when you get to instruments that are less known and less globalized, like Kalimbas, the waters get a little more murky. As you’re going to see, answering the question of “What’s the difference between a Kalimba, Mbira, and thumb piano?” is complicated.

All Thumb Pianos Are Lamellaphones

Anything loosely referred to as a thumb piano is in the instrument classification family called Lamellaphones. A Lamellaphone is any instrument that makes a sound by plucking or striking. Not super helpful to answer the question, but as a general context it helps to see that they’re all related.

Though it’s important to point out that this general classification doesn’t tell us anything about tradition or regional origin of the instruments in the family.

This category doesn’t even apply just to Thumb Pianos. But, since Thumb Pianos (loosely) are why we’re here today, let’s talk about them.

What Is A Thumb Piano?

The term Thumb Piano is also a generalization. It’s a nickname more than anything, but does group these instruments together. So no matter if you’re playing a Kalimba or an Mbira, you’re playing a thumb piano.

Just like all cars are automobiles, but not all automobiles are cars.

As you’ll see, there are a ton of variations of thumb pianos. Some are thousands of years old. Some are relatively new. The size, shape, number of tines, tuning, and purpose vary from instrument to instrument.

Thumb Pianos have only been “industrialized” in the past 60ish years. Prior to that they confined to a small corner of the world. In that small corner, over hundreds and thousands of years, they changed. Some new instruments were created. And to a certain degree they would vary by region alone.

Let’s define this Thumb Piano family as a box with metal tines or keys used to create music, played primarily with thumbs. That should narrow it down a bit.

From there we’ll drill down a little bit and classify them by “formal” instrument names, based on some of the more notable differences.

There are way too many to cover in a single article, so I’m going to focus on just the few that are most important to the conversation.

Mbiras are traditional instruments created in Zimbabwe. There are two main variations of Mbiras, both with different historical uses.

How are they tuned? Well, that’s a little tough to answer. Unlike our relatively uniform tuning in the West, there are thought to be hundreds of tunings used in Africa for these instruments. 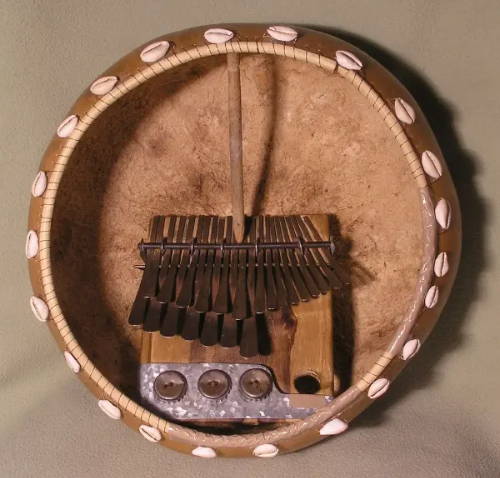 There are two variants of the Mbira. The first is the Mbira Dzavadzimu. This instrument ranges in 22-28 notes laid out in two rows. This variant can trace its origin to the Shona people of Zimbabwe. Mbira Dzavadzimu roughly translates to “voice of the ancestors” and was used in Bira religious ceremonies.

The Mbira Dzavadzimu is actually an integral part of these religious ceremonies, and subsequently to the culture and religion of the Shona. It’s sacred too. Like the name “voice of the ancestors” implies, it’s used to facilitate communication with ancestral spirits.

You can see in the image that there are bottle caps that vibrate and rattle. The bottle caps are a relatively new thing, but objects like shells have been used to create a buzzing sounds for hundreds of years.

The instrument itself doesn’t include the circular resonator, but these are used in ceremonies to amplify the sound. This device is called a Deze.

The main purpose for the Mbira Nyunga Nyunga is entertainment for social gatherings. The build is essentially the same, minus the sound hole found in the Mbira Dzavadzimu.

Kalimbas are also of Zimbabwe descent. Just like you have several sizes of ukuleles, and a rich history of instruments that eventually became the ukulele, the Mbiras eventually spawned several other instruments. Namely the Kalimba. Though they had varying numbers of tines/keys (as few as 8), and they would look different region to region.

Fast forward to the 1950s and a guy called Hugh Tracey founded a company called African Muisical Instruments. He decided to start making a variation of the Mbira, and he stuck with the name Kalimba.

This Kalimba was a sort of mashup of features from several thumb piano instruments. But because of this instrument, more of the world got to experience traditional African thumb pianos.

While African Mbiras have hundreds of different tunings, Kalimbas typically have just a few diatonic (in key) tunings. G is a very common key to tune to and is what High Tracey Kalimbas were tuned with.

C Major is another popular key. The tines can be tuned however the musician wants to tune them, but these standard keys are more common. 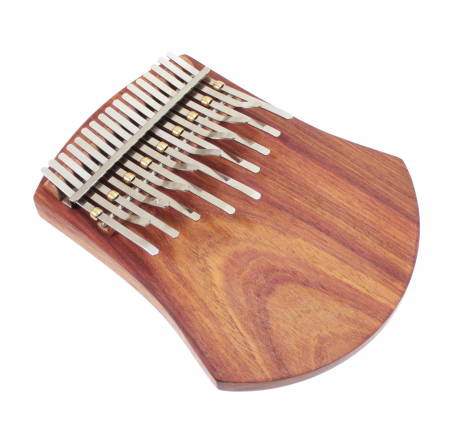 Wait, another name for the finger piano?

So it’s kind of like mutton vs lamb. Depending on where you live you might know one term more than the other. It’s the same thing with Kalimba and Karimba.

Although it’s believed that Mbiras, and several other similar instruments, were considered to be part of the Karimba family of instruments.

Karimbas are very similar to Kalimbas, with a single row of keys/tines, but feature shorter keys/tines. This enables them to be tuned to (what’s believed to be) the original African Karimba tuning.

Why Are There So Many Different Names For Essentially The Same Thing?

This next part is pure speculation on my part, and there’s little evidence to go on, but I’ll theorize anyway.

If you ever dug into the history and origin of Ukuleles, and you should because it’s fascinating from a historical perspective, you’ll know that there are half a dozen instruments that look and sound like ukuleles. But aren’t ukuleles.

But why? Just because of the size and tuning?

Any guitar player will tell you that guitars run the gamut in shape, size, purpose, tuning, etc. An 8-string metal machine is as much of a guitar as a 6-string parlor guitar. People down tune 6-string guitars all the time, but they’re still guitars.

So why do ukuleles, Machete de Bragas, and Cavaquinhos all go by different names?

Most of the reason has to do with heritage, culture, and regionality.

These are three very important things to consider. The ukulele is (was) a regional instrument. Just like the Machete de Braga. Portuguese immigrants brought their Machete de Bragas to Hawaii during the sugar cane boom because they were culturally important to them.

Those instruments eventually morphed into ukuleles. They were different for a variety of reasons, some had to do with materials on hand, some were natural evolutions of the instrument. But this region, Hawaii, developed their own instrument for their own purposes that became a new cultural instrument.

What does this have to do with Thumb Pianos?

Everything. What started as an instrument from a small part of a small country, used for religious ceremonies, eventually morphed into something that was used for social gatherings and entertainment.

It’s natural that it would be made differently. That might have to do with practicality. If you’re playing for yourself and not an entire group, it can be smaller and not project as much. It might be a stripped down version of the instrument.

And over time that instrument is modified and changed to suit the needs (or curiosity) of someone else. The tuning changes, the note range changes, the layout of the tines change, and eventually you end up with Kalimbas; an amalgamation of several of these instruments in the Thumb Piano family.

The next time you pick up your Kalimba, take a moment to think about the significance of it. That many generations ago it was an obscure ceremonial instrument in a small corner of the world. And now it’s in your hands.

And if you don’t already own a Kalimba, go out and buy one here. There are very few globally available instruments that share the rich history of the Kalimba.